The farmers wife slid me a dozen eggs today.  I have never tried fresh eggs and am very anxious to get home.  Besides the nutritional difference Joel said there is a noticeable difference in look,taste and texture.  He said his yolk would be darker due to the higher nutrient value.

You should have seen the look on their faces when I said I had never eaten an egg NOT bought at a supermarket.  From their reaction you would of thought that I asked for a peanut butter and testicle sandwich....priceless.

I have been doing some reading about the difference in nutritional content between store bought eggs and eggs from pastured layers.  My findings have been pretty intuitive.  The pastured chickens are at an advantage diet wise and health wise due to the fact that they are free to roam and have a wider variety of edibles to choose from, such as worms, bugs, wild veggies and whatever else they encounter walking about unlike their caged counterparts who are fed only what the farmer gives them.  Check out the pic below.  I took a store bought egg and one of Joel's and cracked them side by side in a pan.  Notice the yolk on the left is darker?  That is Joel's egg. 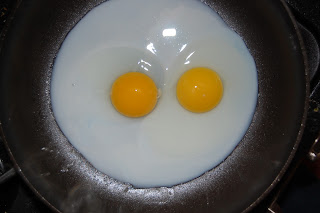 Posted by mainiacfarmer@gmail(dot)com at 3:00 PM 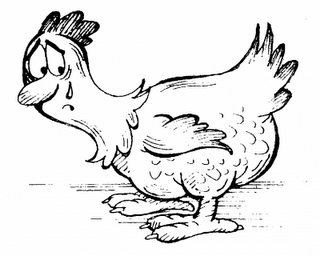 FYI you cannot keep chickens (or any other type of farm animals) in the urban areas of my city...not even a couple egg layers...it's illegal to feed your family, I guess.
Posted by mainiacfarmer@gmail(dot)com at 3:48 PM

Walking up the road towards the back pasture this morning I noticed an egg layer had gotten out and was about 40 yards away hanging out with the turkeys..I sent a text message to the farmer asking if he wanted me to catch it.  He called me shortly after and told me I could try and catch it but it probably wasn't going to happen.  He said he'd been trying to catch it for over a year and a half!  My untrained eyes had mistaken the egg layer for one of the Golden comets Joel has laying eggs for him. 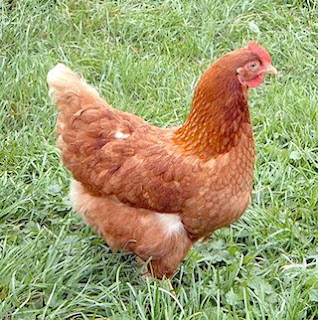 However, this bird was an Araucana 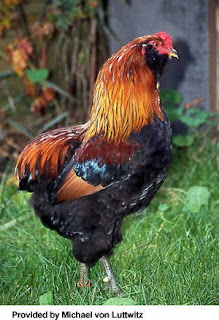 now I know your asking yourself how I got the two confused..well from 40 yards away at 5 in the morning I swear they looked similar...

The Araucana is the free spirit of the farm.  She usually can be found inside the pig pen waiting patiently for the pigs to do some rooting and then she moves in to grab the worms.  Joel showed me where she lays her eggs and if I didn't see it with my own eyes I wouldn't have believed it but, she lays green eggs...green eggs and nitrate-free ham anyone?
Posted by mainiacfarmer@gmail(dot)com at 2:16 PM

Until now I have had no previous experience with cows.  Besides at some local fair I never really even touched a cow.  Once or twice as a kid I remember visiting a dairy farm owned by some friends of my mothers.  Those cows spent most of their lives in stalls standing in their own feces. Of course I have seen many cows driving around the back roads of this state, after all, I do live in MAINE.

I showed up at the farm one morning recently and Joel was waiting for me.  It isn't unusual for him to meet me down front, but lately I don't usually see him till my chores are done; it to me said something was up.  So I got out of the car and he tells me we need to get the cows some water.  I was excited!  I had not yet seen the cows but had heard all about them.  The weather this summer has been pretty dry and all of the resources that Joel usually takes from which consist of about 3 farm ponds have all but dried up.  Normally the cows have pasture pumps, but since the ponds are pretty much dry we are reduced to manually trucking up water to them by means of portable water storage tanks.  We fill the tanks and truck them out into the pasture then fill up portable water bins from which they drink. 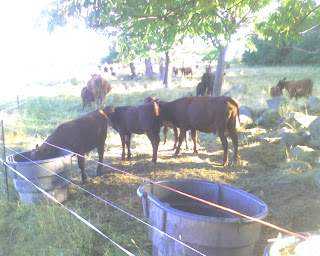 From what Joel tells me his cows are some of the best examples of grass fed animals around.  I can't argue since I know jack squat about cows and what healthy indicators to look for.  I can tell you this.  I have seen cows, mostly dairy cows and to me they always seem to either be in stalls or walking around slowly in some pasture.  I can't tell if they are happy or not. 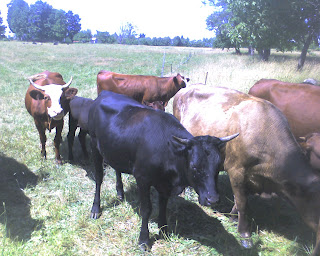 When we got to the pasture I was immediately stunned into silence (unusual for me).  Before me stood a heard of beautiful Devon cows standing in at least 100 acres of wide open pasture..unbelievable..it was one of those reaffirmation moments when I knew farming was what I wanted to do.
Posted by mainiacfarmer@gmail(dot)com at 1:58 PM

After an hour or so of trying to convince 8 pigs that a small trailer is much more desirable then an open pasture, they are trailered and off to be processed!
Posted by mainiacfarmer@gmail(dot)com at 9:57 AM 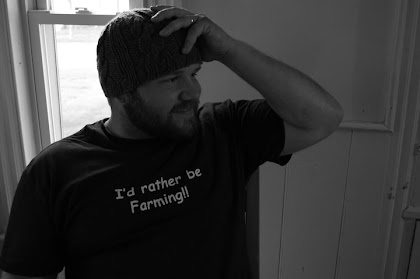